Mr. Wesley Brockman is from Milan, Tennessee, and is in his 9th year of teaching. He is currently in his second year of being the music teacher at Flintville School where he teaches PreK-4 General Music and 5-8 Bands.
​        Mr. Brockman has previously taught in the Franklin County Special School and the Gibson County Special School districts where he has taught, General Music, Marching Band, Jazz Band, Rock Band, and History of Rock and Roll.
Under the direction of Mr. Brockman, the bands have won many awards:
2018 1st place at Music in the Parks at Dollywood in Pigeon Forge, TN
2017 1st place band in Class A at the Pulaski Classic marching band contest
2014 Division 1 State Marching Band Champions - Asst. Director
Superior ratings at Concert Festivals
Mr. Brockman earned his Master's in Music Education from the American Band College through Central Washington State University 2021. He earned a Bachelor of Science in Music Education from Bethel University in McKenzie, Tennessee 2012. His professional memberships include NAfME, Phi Delta Sigma, and Phi Mu Alpha fraternities.
Mr. Brockman continues to play saxophone and other woodwinds in events and local ensembles. His hobbies include cooking, disc golf, media entertainment, and playing with his 2-year-old daughter. He currently resides in Winchester, TN with his wife Anna, their daughter Rachel, and their dog Pepper. 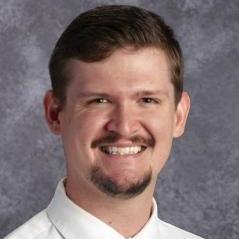